skip to main | skip to sidebar

Hallaniyat Island was the next stop after Musandam, The weather was calling for a day and a half break and a decision has to be made, to make it happen or to cancel the entire trip. Nick from Ocean Active get a hold of our Swedish group that consisted of Daniel A, Christian and Daniel to put them on track of the situation and the possibility of getting trapped on the island, the guys were keen and they understood the situation but they still wanted to go even for a day, At 5:00AM Nick and I left Dubai to take the 10 hours drive to Southern Oman while the other guys left from Sallalah for 3 hours drive to meet us at the marina, the problem was crossing from the main land to the island. At the early morning the temperature was below normal and it was windy and rainy in Dubai, half way through the desert we encounter a heavy rain and wind and it was so cool to see the rain falling on the dry sand, Nick was so concern that after the long drive we might not be able to make it to the Island. We arrive at the marina at 3:00PM to be greeted by Captain Saoud and he himself was in a dilemma, whether to cross or to stay on land, the guys arrived around 4:30pm and were all pumped up and ready to go, again I raised the issue of getting trapped on the island and I get the Ok from all of them to go ahead and cross. The wind was starting to die down a bit and the ride was slow and wet, right at dark and close to the marina we saw flash light from the guys in the island directing us to the dock, We made it! Now all what we wish for is to have a chance to get out and fish tomorrow. I’ve been to Southern Oman 3 times and this was my first trip to stay and launch from the island We get greeted by Ashraf who is the bossman in charge of logistics and infrastructure and he directed us to our rooms, the rooms were basic but clean and some had AC in it. After I spoke to Ashraf he promised a full renovation and a central AC for the next season, I personally had no complain and the service was as usually outstanding, We get to the dinner table and start assorting all the tackle hoping for a great day tomorrow, At 5:15AM Nick knocked on our door for breakfast and in about 45 minutes we were all ready at the boat, our first stop was less then 5 minutes away from the Marina giving the island an option to launch from a strategic point and adding close to 3 hours of extra fishing time every day, we had the option to return for lunch or stay out and fish the whole day, The GT’s were big and mean and the water, shallow! On our first drift Daniel came in tight and mange to land a hefty fish that put a smiles on everybody’s face, it was a great opening day and we saw a light at the end of the tunnel after all the struggling to make it to the island, by the next ½ hours all the guys onboard had a hefty fish on their lap and to consider the trip a successful one, for once I was the one struggling, I manage to get more strikes but the fishes keeps on getting unbutton and in a couple of occasion I broke my PE10 line. The guys started teasing me and Nick adding more spices to the game, They where getting hits on almost every drift and I finally broke the ice to be in the house All what I have to say is that Hallaniyat was on fire! We had over 30 hits that day and only manage to land 10 or 11 fishes, the biggest fish of the first day was 134cm and they where all fat and hefty. 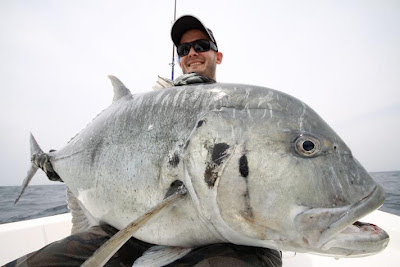 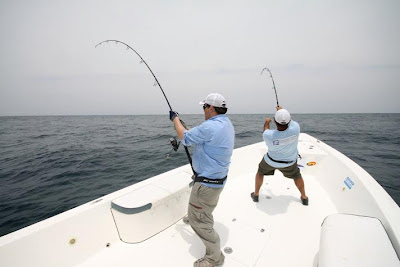 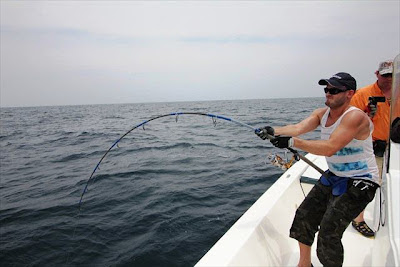 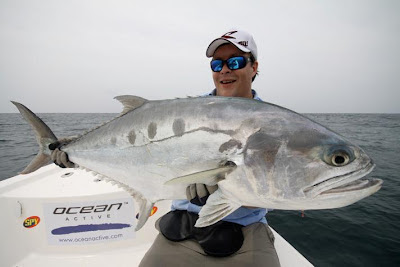 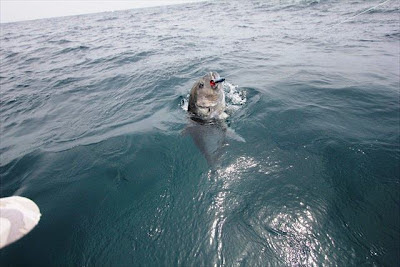 At 2:30PM the guys decided to take a break and go the island for lunch, it took us 10 minutes to get to the island and we took 45 minutes break in total for lunch, you can see the smiles at the guys faces and Nick and I where so delighted to bring a smile and to see the guys happy at the end of the day. Nick being on the top of it made it easy on the guys, he was directing every person in the beginning until each get the hang of it and by the end of the day the guys where fighting like a pro! We where all sore and happy, each of us had a great opportunity and in some cases luck was not in our favor, Hallaniyat island terrain is very harsh and most big GT’s will get away as most of the hits are close to bummies or right at the ledges giving the GT’s the ultimate advantage against anglers and their gear. The night was long after dinner and the debate of error and adjustment is something that never ends, we slept like a baby hoping for another day. 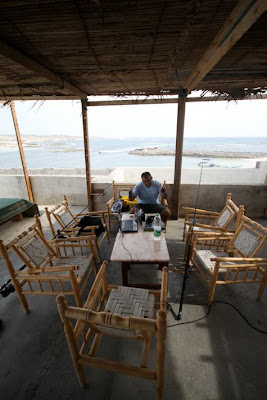 On our next and last day we manage 15 GT’s and we lost many, some of those fish put a heat on us and reefed us, others just spat the hooks and some even breaking line, this trip made me think again for more adjustment, I guess it never end no matter how good you are or how much you know. On our 1st hour and close to the island, Christian gets tight to a hefty fish that gave him hell, Christian manage to land the nice 136cm GT, the fish took a craft bait popper in pea**** color, took a quick pictures and we released the big mama back to where she belong, high five and the game is on. Daniel was on fire and he was getting many strikes and fishes, the Carpenter Gamma did a great damage and the bigger the lures the better it is to get a strike, we decided to fish all day as this might be our last day on the island, Captain Saoud did his best to provide us with excellent services, this guy is dialed in and he knows the game, local, sharp and always smiling, Nick from Ocean Active had run many charters with Saoud this season and you can see the chemistry between both of them, they work as a team on the boat, always with laughter and great spirit. I have to say that Hallaniyat island is one of the best spot for GT fishing at the moment if not the best, I encourage anglers that seeks Omani hospitality and great fishing to visit Oman and be adventurous, it is a beautiful place that offer beauty by basic and nature! We pushed it that day knowing the possibility that this is our last day, it was such an amazing short trip but the beauty of it, are those great moment and laughter we had with each others, it was a team work and we manage to have fun, yes we caught fish but the adventure and the way things fall into places made this trip a unique and a special one, Nick checked the weather at night and we made the call to evacuate the island, the weather was calling for 25knot+ wind for the next 5 days, we packed our gear and waited for the morning, Nick and I get dropped in to the main land at 6:00AM while the guys waited to be dropped in to Salallah to take the flight to Dubai, they all wanted to come back and I am sure we will see them next year. While driving to Dubai through the desert we get stopped by a military check point in the middle of the dessert, directed to the officer on the front, the officer greeted us with a perfect English accent asking where we came from, Nick reply that we were fishing on the island and all of a sudden the officer lit up and staring asking us about our fishing trip, I then replied to him in Arabic and the officer went on to invite us to his town for dinner, we thanked him for his hospitality and we carried on to be greeted with rain and rain and more rain, Yes, it does rain in the desert  Made it to Dubai around 7:00PM to be greeted by Nick’s mom that flew from South Africa and manage to prepare dinner for us, I had a great evening at Nick’s house. I would like to Thank Nick from Ocean Active for his hospitality and great services, keep up the great services Nick, you are in a league of your own. Ashraf and Captain Saoud for their outstanding services, our Swedish clients that gave us the opportunity to serve them. Saltywater Tackle will have 5 trips to Southern Oman from November 2012 till April 2013, 2 of these trips are fully booked and as soon as I have a chance I will post those open spots to the public. Tackle used: Rods: Race Point 200,250,300 (Prototype), Carpenter Monster Hunter, Hot’s Tide Lez 77XXXH. Reels: Stella Shimano SW18000, Daiwa Dogfight. Lures: Shell Shaping, Carpenter, Craft Bait, Siren, Fisherman, Ocean Active. Line: Sunline, Jerry Brown, Varivas. Shout Sasame. Enjoy the pictures. Tight lines Sami 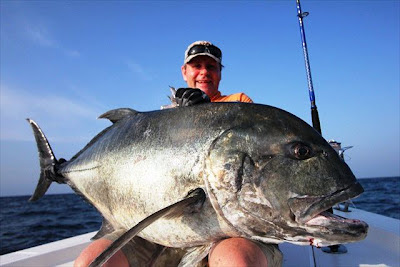 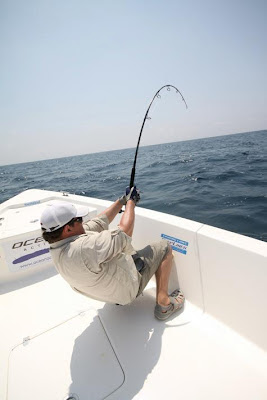 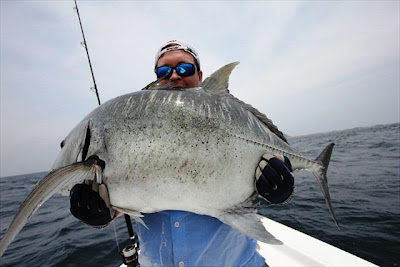 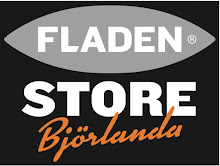